This month at Delurk for 4 more days you can see the collaborative work of PARAIL and Conspiring Carnies,

Here are a few links where you can find out more about the individual artists:


There is much to be said for cooperation. It is a mainstay in the Arts District. A neighborhood championed by folks who are fierce defenders of freedom, independent minded, and absolutely in need of each other.

I decided to share three works on this blog after a conversation at the most recent Gallery Hop where I had the chance to speak with a stranger about the results of an art-making frenzy. The snapshots were taken on the floor on the scene shop as the dust was still settling.

Well, actually, Verge was created on the tailgate of my car on a bracing windy day. It was the golden hour and I had just delivered what I thought was a complete body of work to Liz May at Realizzation Records.  They have a great space and for the most part the show worked great, but something was missing. I made Verge to balance the overall composition of the work in a room, painted from life, completely in the zone.

The other two were painted in response to comments I heard down the street. A young man was complaining that his supervisor just did not understand what it was like to be one of the "trench people." Of course, that supervisor had only 3 years previous been doing the very same job. and overhearing the complaint, was fairly amused. After a righteous burger together and most likely, a brew or two, they had found their common ground. The paths we take are often forged by others. Sometimes, the path is so worn, you cannot see beyond it. Well Worn Path and Enter Below are both musings on perspective and experience.

We all need places where we can find the "zone;" safe places to talk, rant, dance, paint, listen, be inspired to greatness. In the Arthood, we seem to know what we seldom say, we keep it going down here together.

I'll try to start posting twice a month, about galleries and artists and other things going on around the Arts District; to share my perspective on the inevitable changes we are experiencing in on Trade and Liberty Streets and, hopefully, engage you in the conversation.

So tune in and Get out on the Town! There's a lot of people out here waiting to meet you and hear what you have to say about the path.
Posted by Musingisfree at 6:05 PM No comments:

musing is free: "Coming Soon" is now showing at Delurk Gallery: Coming Soon - on display now through Sept 1st @ Delurk This Month's Installation is set to evolve all month with participating artists ...
Posted by Musingisfree at 10:51 AM No comments: 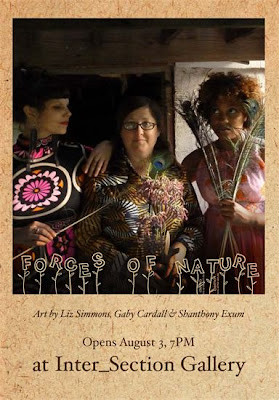 One of the nicest spaces to view art in Winston-Salem is Inter_Section Gallery at the northern end of Trade Street's 600 block.

This month Kate Magruder has brought a fresh eye to the Arts District area and this show is no exception; featuring three local women's artwork. Each with a distinct approach to art making.

Well worth the look.

Posted by Musingisfree at 10:00 AM No comments:

Trade Street Tracker: And the Bands Play On....

Trade Street Tracker: And the Bands Play On....
Posted by Musingisfree at 8:54 AM No comments: